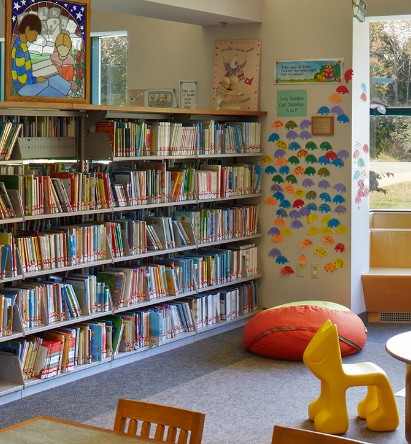 It can be fun to find a series of books that you love, since you know there is another book to look forward to. The short description of each series may help you choose a series you will enjoy.

This series stars a teenage spy, an orphan with an uncle in the British secret service, who is reluctantly recruited but turns out to be very good at his craft.  High-tech, 007-style tools of the trade are featured. Fast-paced and fun.

Bartimaeus, a five-thousand-year old djinni, and Nathaniel, his young master, have a complicated relationship and different priorities. This witty and imaginative fantasy series is set in an alternative London, where rulers exercise power with the help of magical beings such as djinnis, from the Other Place.

Books of Ember, by Jeanne DuPrau

In an underground city, inhabitants depend on fast-dwindling supplies which were stockpiled by an earlier generation who escaped an unknown disaster above ground. They had left instructions explaining how to re-emerge into the light once the danger is past. But the instructions have been lost and no one remembers the world above. Can Leena and Doon lead the people of their city out of the dark into a new world?

Crispin is a peasant boy in medieval England. His mother has died, leaving him an orphan and he finds that he has a powerful enemy who wishes him harm. Fleeing his village, he finds a friend and protector in a traveling juggler called Bear. A fast-paced and suspenseful adventure series.

Diary of a Wimpy Kid by Jeff Kinney

These funny and relatable books are in the form of the diaries, illustrated with cartoon drawings, of Greg, an ordinary boy with big dreams. He makes ridiculously bad decisions while scheming to make things go his way. His plans never fail to backfire, creating problems and hilarious situations.

Beginning with Dealing with Dragons, this series follows the life and times of Princess Cimorine, who, rather than following the usual princess sort of career, decides to leave home to work as cook and librarian for the dragon Kazul.  A witty and richly-imagined fantasy series.

Heroes of Olympus, by Rick Riordan

This follow-up to Rick Riordan’s Percy Jackson and the Olympians series introduces Roman demigods, who are rivals of the Greek demigods of the earlier series. The two groups have to join forces to fight against a common enemy, Gaia, for control of the earth.

Four children, recruited by a school looking for children with special talents discover that they are to be used by a criminal mastermind aiming to take control of the world.  They must figure out how to work together and use the unique talents of each to foil his plan and save the world.

Percy Jackson and the Olympians, by Rick Riordan

This adventure series features heroes who are demigods, whose parents are ancient Greek gods. The books are based on Greek mythology but set in modern times. Riordan’s second series, The Heroes of Olympus, introduces Roman demigods, pitted against the Greek demigods. The two groups have to join forces to fight against a common enemy, Gaia, for control of the earth.

Will is an orphan in this suspenseful and, at times, quite scary series. When he is fifteen, he is chosen to be apprenticed to Halt, a member of the Rangers, the protectors of the land. On Halt’s behalf, he goes to battle against the evil Morgarath along with a boyhood friend. Themes of comradeship and honor emerge as the struggle between good and evil plays out. Although a fantasy, this series is praised for its well developed and believable characters.

The Secret Series, by Pseudonymous Bosch

Beginning with The Name of This Book is Secret, these five funny and suspenseful books have clever twists and turns, puzzles to solve, and three interesting and likeable young characters who battle evil forces and accomplish challenging missions.

Secrets of the Immortal Nicholas Flamel

Josh and Sophie, fifteen-year-old twins, are working summer jobs in San Francisco when they meet John Dee, a four-hundred-year-old magician with evil plans, who wants to steal a magical book from the bookstore where Josh works. The owner of the book store is really Nicholas Flamel, also hundreds of years old and also a magician. He tells the twins that they are prophesied to be the ones who can save the world from Dee and his masters. The series ranges over many locations, including London and Paris, with characters from myth and history in a fantastic and complex story.

In this futuristic dystopian series, a group of children must remain hidden because they are third children, forbidden by the Population Police. Their suspenseful and original stories are full of danger and difficult choices.

Theodore Boone’s parents are both lawyers and although Theodore is only thirteen, he has picked up lots of knowledge of the law and is respected in his small town’s legal circle. The first book, Theodore Boone, Kid Lawyer, involves a murder trial about which Theodore has information not known to any of the lawyers or judges involved, but there are complicated obstacles to revealing the critical information. In subsequent books, Theodore continues to use his skills to track down the truth and ensure that justice is done in these mystery/legal thrillers with a smart and likeable teenage hero.

This fantasy series follows the thrilling adventures of four clans of wild cats—ThunderClan, ShadowClan, WindClan, and RiverClan as they battle one another and other dangers. The original series is six books long, but also look for prequels and sequels which introduce new generations of the cat clans.

Four books (so far) set in the small town of Willow Falls share themes of friendship and growing up, with humor and touches of magic. In the first, 11 Birthdays, two friends, Leo and Amanda, share a birthday and have always celebrated it together. But before their eleventh, the friends have quarreled and celebrate apart. The next morning, Amanda finds that it is her birthday all over again. Leo and Amanda play a small role in the second book, Finally, in which Rory is excited to be turning twelve because her parents have always told her that when she is twelve she will finally be able to do a long list of things she has been wishing for. Rory, Amanda, and Leo all appear in the fourth, 13 Gifts, but this time it is Tara’s story. In the fourth, The Last Present, Leo and Amanda return to center stage in a story involving time travel and romance.